Real Name: Guillaume Berroyer
Profile: Ark is the artist who first brought the minimal style to many French. As soon as 1997 he issues on the Brif label "Siderurgie esthétique" and "De derrière les fagots", two EPs which were not much of a great success... It's logical, Ark is a precurssor, always light years ahead of his time.

But he doesn't loose faith in his craft for that, and collaborates in 1999 with Herbert (UK) and Losoul (GER) on "Belle lurette". Everyone got skeptic listening to this new music and yet, as today Losoul or Herbert have became stars of the genre, they discover the sound of Ark!

Ark doesn't begin his career at that moment. He first plays guitar in an 80's funk band and then starts with the heavily talented Pépé Bradock the band Trankilou . Remember, "Saint Glin-Glin" and especially "Escalope de dingue" which became an interplanetary hit. After that, he unexplicably misses the jackpot with "Le magicien d'os", its funky as hell & hypnotic chant ("I like the way your booty shake, ah, ah") and its monstrous remixes.

Ark has now joined forces with french fellow artist Cabanne as Copacabannark (on Perlon); he also issued an album as Shalark (Ark with Shalom) in 2001 and even manages to find the time to pursue his solo career, with the release of an EP on the prestigious Playhouse label (GER), as well as a LP/CD compilation entitled " Alleluyark " on the french label Circus Company. Two new tracks will also be available soon on the Katapult "Various Artists" upcoming compilation, as well as a few exclusives on the next T.I.M.E.C. releases, the parisian label with a twist which gracefully helped him with the site web you're now visiting...

His live sets always include stupendous and now famous surprises. The public of the Pulp in Paris won't forget anyime soon his incredible energy-fuelled mixes from reggae to hardcore with Mr. Oizo , Feadz or Herbert. He's also been heard at the Rex, the Batofar, the Scene, the New Casino in Paris or the Panorama Bar from Berlin. When he plays, his hair get moving all around, his body is a prisoner of the beat, he becomes the most beautiful man in the world... and the most unforeseeable. 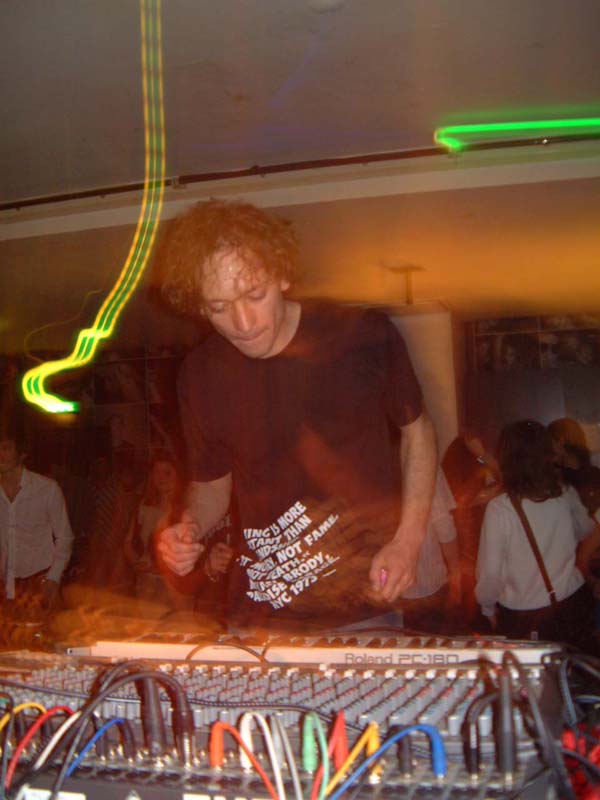 So I discovered Ark a year ago and I fell directly in love whit his music, it has a different sound which I like very much.
Not really comparable to the regular minimal.
I prefer alleluyark vol 1, the unknown mysterioso on karat and the absolut abstract ep on Brif records.

So do other people also like his work or am I the only one??

I like some Ark's stuff like Copacabannark on Perlon, Sucubz (a nasty track on Le Magicien d'os), and at least one track from each of the Alleluyarks. He's definitely got some unique stuff...
Top

what does his shirt say?
Top

I really like some of his tracks - "Satanark" is a f*cking wicked, rough, weird, pumping tune!! He certainly has his own sound, which is definitely a good thing. He's also done some great remixes, such as D.R.U.G.S - Miss Amerik-Ark. One bad thing is that a few of his tunes just sound like remixes of each other. When I first heard "Satanark" I thought it was a remix of "Sweet Chat Rio" because it seems to have some of the same vocal samples in it. You also find the same rhythms re-used in different tracks.

Even so, I definitely rate him as an artist, because his style is just so unique, and he has produced some excellent records.
Top

"Nothing is more important than friendship, not money, not fame, not death"
Michael Brody, Paradise Garage, 1993

The quote is supposed to come from Michael Brody, founder of the Paradise Garage in NY. He's supposed to have said that in 1973 (that's what is says on the T-Shirt, too). The Garage only opened in 1977 - and closed in 87 - so there's not really a connection to the club.

Regarding Ark:
Great ideas, can get a bit repetitive - probably simply in a universe of his own (or maybe sharing it with oizo, cabanne?). I saw him dj a while ago, superb stuff! Got hardly a mix right in the usual sense, but awesome selection and unstoppable energy flow. I prefer him to the ultraserious mixrobot anytime

Regardless... the t-shirt, the Paradise Garage, and Ark all rock!!!
Top
Post Reply
34 posts